Guide Dogs For The Blind

How dogs are trained to see for the visually impaired

In 1927, a visionary woman set her sights on training dogs to help blind veterans.  After partnering with a blind man, they trained their first ‘Seeing Eye’ dog, and the lives of thousands of visually impaired people changed forever.

What’s the Difference Between a Guide Dog and A Seeing Eye Dog?

Seeing Eye dogs are bred, raised, and trained at the Seeing Eye School in Morristown, New Jersey. The school is the oldest in the country and dates back to 1929.  The school has a trademark on the name Seeing Eye so only dogs that are trained at the school may legitimately be called such.  Dogs trained at other schools to serve visually impaired people are called guide dogs.

When Was The First Seeing Eye Dog Trained?

Ms Eustis was so moved by what she witnessed at the training school in Potsdam that she wrote an article that was published in one of America’s most widely read periodicals at the time, the Saturday Evening Post.  Called the Seeing Eye, the article featured a number of pictures of guide dogs assisting blind veterans in many tasks.
“The dogs are supplied by the Shepherd Dog Club of Germany and are either donated or bought at the lowest price compatible with the qualities they must have, for these blind leaders are the distant cousins and the cinderellas of famous show dogs; they not only have the goods but they deliver them in the shape of courage, intelligence and service. The total cost of a dog, trained and ready to leave the school, is about sixty dollars, which includes the initial cost of the dog.” Excerpt from The Seeing Eye, the original article published in the Saturday Evening Post.

When a blind American, Morris Frank, read the article, he wrote to Eustis asking if he could have a trained dog.  She agreed and Frank flew to Geneva where he met his guide dog, Buddy I.  After some training with Buddy,  Frank returned to New York. Over his lifetime, Mr. Frank would own a succession of five more guide dogs all called Buddy.

“Is what you say really true? If so, I want one of those dogs! And I am not alone. Thousands of blind like me abhor being dependent on others. Help me and I will help them. Train me and I will bring back my dog and show people here how a blind man can be absolutely on his own.” Excerpt from Frank’s letter to Eustis
When Frank disembarked from the boat in Manhattan and crossed a busy New York City street with Buddy, the press went wild.  The public embraced the inspirational story.  At the behest of Frank, Eustis returned from Geneva and the two founded the ‘Seeing Eye’, a school that trained dogs to guide the blind and taught the blind how to use the dogs. The school first opened in Nashville, but moved to Morristown, NJ in 1929 where it resides to this day. 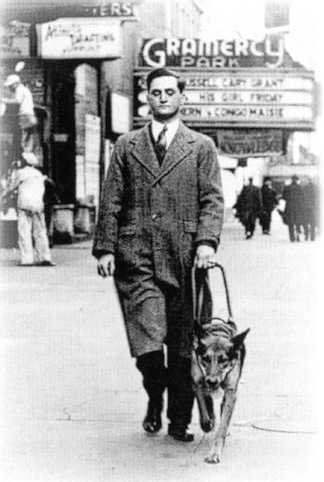 Exposure To Lots of Stimuli At An Early Age

At the Seeing Eye school, puppies are allowed to spend time with their mothers and other dogs, but are exposed to lots of stimulation to prepare them for all the things that they will encounter when working as adult guide dogs.  They meet lots of different human handlers who frequently change their appearance by wearing different hats, masks, glasses, and clothes; and they are exposed to loud noises like sirens, traffic, and music all as a way of desensitizing them to things that would otherwise distract them from the job for which they are training.

Turned Over To Foster Care At 8 Weeks

At 8 weeks of age, Seeing Eye dogs are moved into foster homes for approximately 1 year where trained volunteers work with the puppies to teach them basic manners and where they continue their exposure to various stimuli, people, and animals in the outside world.

Returned To Seeing Eye After A Year

After a year, the young dogs are returned to the school, given a complete physical and a dental cleaning, and are then trained for 4 months by a skilled, experienced trainer.  If the dogs graduate, they enter a class where they are introduced to their prospective, visually impaired handler. Dogs that do not graduate the training program, along with retired dogs, go up for adoption.

7-10 Years of Service And Then Retirement

Which Dogs Are Picked To Be Guide Dogs?

Guide dogs can come from anywhere, including shelters.  The breeds used for guiding the blind are typically golden retrievers, German shepherds, and Labrador retrievers.  Standard poodles may also be used if the prospective owner is allergic to dog fur.  According to its website, the Seeing Eye School has its own breeding facility located in Chester, NJ.  There, geneticists and handlers work together to decide which dogs will be bred with one another. The dogs are heavily socialized at the school and enjoy a life full of stimulation that includes interaction with other dogs, quality veterinary care, play time with trainers, and bonding time with their puppies.

What’s It Like To Be a Foster Parent For a Guide Dog?

The job comes with a lot of responsibility.  Foster parents have to prepare the home for an 8 week old puppy by puppy proofing their home.  They have to work through the housebreaking process and to teach their foster pup basic manners like those outlined in the Canine Good Citizens Award.  They also have to expose the puppy to as many different stimuli as possible:  different ages, genders, and races of people; different modes of transportation; different environments; different sounds; and other kinds of animals.  In general, this is a good idea for any pet owner, especially ones that own dogs that may have aggressive tendencies or are especially feared.  For example, owners of German shepherds, Rottweilers, Dobermans, and pit bull-types should know that many people believe these breeds are dangerous, so owners should try to acclimate these kinds of dogs to many environments, sounds, people, and uniforms to ensure that their dog is on his or her very best behavior when meeting humans.

Incredibly, guide dogs don’t just pull their owners along a set route.  They undertake the job of being 360-degree eyes for their charge. Guide dogs are trained to walk and stop upon command (guide dogs are color blind and cannot see lights change), but will refuse a command if they believe they are leading their charge into danger.  They are trained to spot errant cyclists and cars that disobey traffic signals and to look for obstacles that are in front of them and any obstacle that is above their handler. They know enough to not be distracted by other dogs, by loud noises, or by crowds.  They are trained to urinate and defecate on command so that all the handler has to do is to feel the dog’s back to know what kind of eliminating the dog is doing and where he or she is doing it.  At the Seeing Eye School, dogs are trained for 4 months in Morristown, but are also sent to New York City for the ultimate test against distractions.

What Are Guide Dogs Trained To See?

How Much Does A Seeing Eye dog Cost?

Training a guide dog is estimated to cost somewhere between 40 and 60 thousand dollars per dog, but not-for-profit schools like Seeing Eye only charge students a fraction of the cost and actually have a policy that no one is ever denied a dog because they can’t afford it.  According to the Seeing Eye website:
“Each student is asked to pay $150 for his or her first visit to The Seeing Eye and $50 for each subsequent visit. Those who served in the armed forces pay $1. This fee, unchanged since 1934, includes the cost of the dog and its initial equipment; the student’s instruction with the dog; room and board during the 18 to 25 days the student spends at the school; round-trip transportation from anywhere in the United States or Canada; and lifetime follow-up services.”  Seeingeye.org

Where Can Seeing Eye Dogs Go?

Under the American with Disabilities Act, service animals, including guide dogs, must be allowed access to all public spaces and it is illegal to refuse a handler and his or her guide dog access to any place of business.  It is also illegal to ask the owner of the service animal for proof of the dog’s service status.  While working, service dogs must be under the control of their handler, either on a leash, held in the arms of the owner, or on a harness.  They are not allowed to roam freely.  Service animals and their handlers may not be segregated from other members of the public or given inferior service or access.